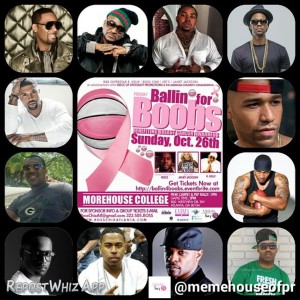 Celebs Come together for a great cause 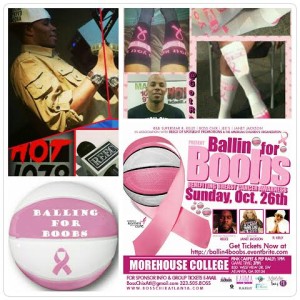 About The Event-  “Ballin’ For Boobs” charity basketball game’s goal is to strengthen the communities knowledge on Breast Cancer and our community’s  survivors. This is presented by Boss Chix CEO Janet Jackson & R&B Legend – R. Kelly.

All of this to raise breast cancer awareness and give proceeds to Susan G. Komen foundation for research.

Celebs include Snootie Wild, Lil Scrappy, R. Kelly, Shawty Lo, 2 Chainz and Many More + some Huge Surprise Guest. The Event will be hosted by Hot 107.9’s own REEC!

There will be music, Live DJ, concession food, half time show, mascot, and gift bags.  Pink Carpet styled pep rally event with media, and celebrity guest. Also join the fun and build your own pep squad for the pep rally.